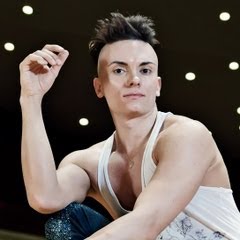 Last night I heard organist Cameron Carpenter perform at the Akron Civic Theater on its Wurlitzer theater organ, as part of a series sponsored by the University of Akron and E.J. Thomas Hall. Thomas Hall doesn’t have an organ, and Cameron’s long-awaited digital touring organ isn’t yet complete, so he had to do battle with the Wurlitzer, which put up a tough fight, including a couple of ciphers (notes that don’t stop playing when you release the key), but Cameron ultimately prevailed. The audience was slim, filling only the front section of the main floor of the theater. And if the sponsors’ plan was to entice younger people, it didn’t work—the audience was proportionally higher with gray hairs.

Cameron took his bad boy image to the max, at least during the first half of the concert, where he was sullen, sarcastic and never looked at the audience head-on during his remarks between pieces. (He sat half-way on the organ bench and looked at the wings of the stage.) And a lot of what he had to say was just pretentious bullshit, for example, his statement that in playing the Bach G Major Trio Sonata—a very difficult piece technically—one should just relax and let the music play itself. (Not that he cares one iota what I think.) If his idea is to draw new audience to the organ, it seemed an odd way to do it, unless the audience has masochistic fantasies. Do I really need to be talked down to? In the second half, he was remarkably more relaxed, even friendly, as if he had changed his attitude along with his costume.

All that said, there is no one else in the organ performing sphere that has Cameron’s technical skills, and his performances are riveting, if willful and infuriating. The only comparison that might be made would be to the French outlaw virtuoso Jean Guillou, in his prime. I found myself not caring in the least that Cameron’s performances were not “historically informed.” He also played to his own strengths, in his transcriptions and arrangements of other music, starting with an etude based on the first movement of Bach’s first cello sonata. The cello part was played in the pedals, with increasingly complex layering on the manuals above it. He also made an effective transcription of Liszt’s “Funerailles,” originally for piano. It seemed tailor-made for the theater organ. He ended the first half with an austere and mostly atonal composition by a Ugandan composer whose name I did not recognize. (And since there was no printed set list for the concert, I can’t confirm.) With massive sounds, including pedal chords, on full organ, it was as if Cameron truly was trying to test the Wurlitzer to its limits. There weren’t any ciphers after this piece, but there was one after Marcel Dupré‘s “Variations on a Noel,” which Cameron dissected and reassembled in his own fashion. (At least the cipher was on the tonal note of the piece.)

The second half was devoted to lighter fare, a medley of some Gershwin tunes, and ending with three relatively brief improvisations devised by the performer on the spot, including a concluding fugue recognizably, if loosely, based Beethoven’s famous piano piece “Für Elise.”

It was announced that Cameron Carpenter will be back next year with his new touring instrument. Maybe playing on a familiar instrument will put him into a better mood.