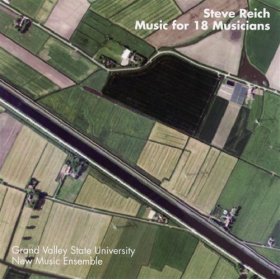 I was led to a new recording of Steve Reich’s masterpiece “Music for 18 Musicians” via Alex Ross’s blog therestisnoise.com and a wonderful video on Youtube that was released to promote the CD. So, you say, “Music for 18 Musicians” has been recorded by Steve Reich’s own ensemble years ago. What makes this recording unique is that is was performed by the New Music Ensemble from Grand Valley State University in Allendale, Michigan–not exactly a hotbed of the avant garde. The performance is astonishingly precise and musical, and the video is touching, showing how hard these students (most of whom are Music Ed majors) worked over the period of a year to learn the piece. I downloaded it from amazon.com, but it’s also available on iTunes and as a CD. I cannot recommend this highly enough to fans of Steve Reich’s music.